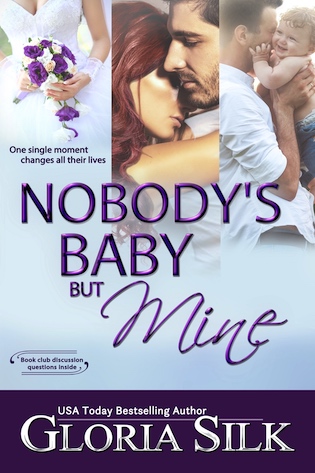 Nobody’s Baby But Mine
Gloria Silk

From USA Today Bestselling Author, Gloria Silk this is
a gripping, romantic and sensuous novel of marriage, fidelity, fertility and the power of
love.

“New women’s fiction that touches all of our emotions, fulfills our yearnings,
and opens up new possibilities.”

Can Rachel and James find their way back into each other’s hearts after tasting temptation
and facing devastating news? How strong is love in the face of reality? The
seven year marriage between Rachel and her adoring patient saint of a husband has grown
from great to blessed. But after years of failing to get pregnant all Rachel craves is a baby.

Her marriage to James is perfect…until she bumps into her sexy ex-lover, Brandon. Her
desperate thought of wondering if he can get her pregnant makes
Rachel realize that something has to change. After having more fertility tests she meets a
beautiful pregnant career woman. It seems destined, and as they bond the young woman offers
Rachel a gift that will change all their lives.

But has Rachel pushed her suddenly aloof husband away? Is it really his pressure at work
or is he keeping something from her? Can they ever become a happy family, or is it too little too
late? And where does Brandon come into all this when she discovers her husband’s biggest
betrayal?

Check out the Kickstarter for the sequel! 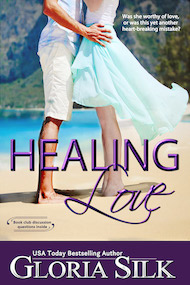 The March rain pelting the kitchen windows made Rachel think of tears. And there were
indeed tears in her eyes as she told JT that their best friends’ marriage was over. The
inseparable love birds, Tina and Andy, were the last couple they thought would lose in the
marriage roulette. Rachel had also thought that their two young children were another
unbreakable bond.

Her husband frowned as he looked up from his poached salmon and asparagus laden plate.
“I didn’t even know they were having problems.”

Her temples throbbed. She had been too self-absorbed with her own life and yearning for a
baby that she hadn’t noticed any signs or cracks in Tina’s marriage.

Some friend you are, Rachel.

“He was having an affair with a friend of theirs since Justin was born. Tina didn’t suspect a
thing…It’s so sad how everything can change so suddenly. Why would a man jeopardize his
whole family life like that?”

How fragile life and relationships seemed.

Nervous for all marriages she thanked God for her own strong bond with JT. Despite their
issues of unexplained infertility, their marriage was blessed even after seven-and-a-half
years.

“I’m sorry to hear this. I’m shocked…but maybe he wasn’t getting what he needed from
her—”

“What? Tina’s been a great wife and very patient with him all these years.” She felt her
anger rise thinking of Tina’s meddling mother-in-law—so much like her own—and Andy’s
fledgling music production business, which had ostensibly kept him away from home for days at
a time. “It’s disgusting what he’s done.”

“I agree, but no one knows what really goes on behind closed doors.” He sighed, “But
there’s never any excuse to screw up a marriage.”

Rachel shook her head. “No, and especially with Emily and Justin….” How would Tina
manage with her five-year-old daughter and almost three-year-old son on her own?

He shook his head. “He’s a fool. I’m disappointed for them all.” He glanced at her, his fork
half way to his lips, “Don’t worry, Rachel, I know how much you care for her. All you can do is be
there for them.” He then put a salmon morsel in his mouth.

“Communication is the most important thing in any marriage, right?”

She felt JT’s eyes bore into hers as he watched her across the narrow mahogany kitchen
table. Putting down his cutlery he reached for her hand nearest to him. She adored that sparkle
in his gunmetal-grey eyes and that slow smile.

“We’re not like the rest, to do anything stupid and ruin everything.” With a quirked brow his
thumb massaged the top of her hand.

Her heart skittered at JT’s deep knowing expression the way it had when they met at a
mutual friend’s wedding in London nine-and-a-half years ago. He seemed to always know how
to brighten her moods, make her smile, feel safe and whole.

He kept her grounded, focussing on what mattered most; them: them, together.

Rachel would concentrate on her part-time job with Gareth Robinson-Brown’s real estate
agency and not drive herself crazy about why she was still not pregnant after five years of
trying. She remembered JT’s wise words after their last specialist appointment a couple of
months ago to stay patient and positive and not let anyone stress her out. That was why she
had given up running her own team in a Central London agency three years ago.

Neither did she get too involved in her younger sister’s private life. Emotionally supporting
the twenty-five year-old Abby without getting sucked into the turmoil of her sister’s love life was
proving wise and healthier for both sisters. She pushed aside the uneasiness she had felt sevenmonths ago when she had met Rick, the new boyfriend. Abby had seemed happy with a bright
‘I’m in love’ smile at her trendy restaurant in Islington, but the phone calls had petered out over
the last couple of months. Rachel resolved to call and see how she was doing.

In the meantime, she would be truly present for Tina. She took in a breath and slowly
exhaled and felt a smile play on her lips. “I know you’d never dare stray, because I’d just have to
kill you.” She threw him an arch look.

JT grinned. “I’d never want to be with another woman but you, and you know it. And it can
work both ways. I’d strangle any guy who even looks at you in that way.” His eyes darkened, his
passionate lips thinning into a resolute line on that handsome rugged face, making her smile
broaden. “Like your old boyfriend we bumped into… where was that? The French restaurant
soon after we met.”

“Brandon.” Her pulse raced for a few seconds and then settled. “It was our second
date.”

“Ah, so you still remember the name of that pretty-boy, no-good gigolo.” The twinkling glint
in his eyes was warm and inviting. “You’ll have to make up for that, wench.”

He smiled again. “You’re going in the right direction.” He let go of her hand for the moment it
took to push his chair back and come and stand beside her. Holding both her hands he raised
her left one to his lips. His touch was always simultaneously calming and arousing. He leaned
towards her. “Am I reading those sexy brown eyes right? There’s more than one choice for
dessert to make up for…”

She licked the corner of her lower lip while he stared at her mouth as if it was a luscious
strawberry, his favourite fruit. Especially when served with melted semi-sweet dark
chocolate.

His lips slowly gravitated towards her mouth.

Even after all these years together, Sundays were their full day and night for each other and
no one else. Their routine became a variation of sharing a long shower or an indulgent hot soak
in the tub before dinner.

Before long they lay in each other’s arms against the soft cushions on the large Persian rug.
The large fire in the regal fireplace shed heat and golden light over their naked skin and the
plush cream throw. The intermittent crackling of the flames accompanied Nora Jones in the
background. The light banter between them changed as JT gently placed Rachel’s empty wine
glass on the sofa table beside the plate with the single remaining chocolate-dipped strawberry.

He leaned closer. “I’ll make you forget everything and everyone tonight.” JT murmured low, nuzzling his lips against her ear and migrating to her other sensitive erogenous zones. Almost
purring, she lay back welcoming his explorations. Her arms encompassed his broad shoulders.
She closed her eyes and counted her lucky stars. Everything would work out, even filling the
nursery with their gorgeous, healthy baby. Pushing the thought out by letting the languid feelings
of their intimacy flood her mind, she gave herself over completely to the bliss.

“I’ll always adore you.” He groaned, inhaling into her throat. Her pulse and heart beats
quickened as he explored her skin and his lips hovered so close to hers. “Don’t ever doubt
it.”

“I know. I—I love you, too.” Shivers of anticipation made her voice shake. Then they were
kissing, hungry and sated at the same time. As always, his touch and sure kisses covering her
tingling skin melted her insides.

Lightly, her shaking fingertips traced a butterfly-light line from his neck to his shoulders. His
hard biceps stiffened at her caress. She loved his strong physique. Running impatient fingers
through his thick silky hair she directed his head lower and kissed him deeper. She was home,